While World Triathlon Series action kicked off in Auckland this weekend with brilliant performances by Javier Gomez and Anne Haug, it wasn’t the only international event on the ITU calendar. The European Triathlon Union season got underway in Portugal, while across the Atlantic ocean another Portugese-speaking country welcomed competitors at the ITU Triathlon Premium Pan American Cup in Brazil.

2013 Quarteira ETU Triathlon European Cup
Last year’s Under23 World Champion Non Stanford (GBR) started her season in much the same fashion as she ended it last year, winning the women’s race in Quarteira. The Brit made it look easy when she blasted through the run to cross over more than two minutes ahead of the field. Behind her, Germany’s Rebecca Robisch and South Africa’s Gillian Sanders battled for silver. After going stride for stride the entire 10km run, it was Robisch who just edged out Sanders for second, leaving Sanders with bronze.

Like in Auckland, Spain came up victorious at the European Cup when both Fernando Alarza and Vicente Hernandez made the podium in the men’s race. While last year’s winner Aurelien Raphael (FRA) drove the pace early in the race, it wasn’t enough to hold off Alarza in the end. Alarza claimed gold, while Raphael settled for silver and Hernandez rounded out the podium with bronze. 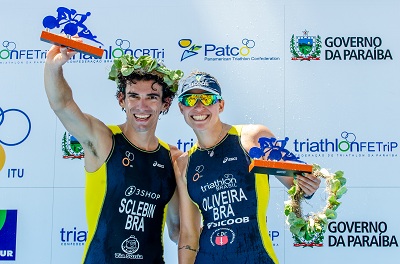 2013 Joao Pessoa ITU Triathlon Premium Pan American Cup
Olympian Pamela Oliveira (BRA) absolutely destroyed the competition in the women’s race, easily sailing to the win by more than nine minutes. Oliveira gained an early and sizeable advantage on the swim, heading for T1 with a minute and a half lead. She then sped through the bike course five minutes faster than anyone else before finishing the day with the only sub-40 minute run for the win. Carolina Furriela (BRA) led the chase group, but stormed to second with a solid run, leaving bronze for Flavia Fernandes.

Brazil also swept the podium in the men’s race, led by Diogo Sclebin. Although he stayed with the chase pack on the swim and bike, he unleashed a speed that couldn’t be matched on the run, passing by then leaders Bruno Matheus and Danilo Pimentel for the win. Juraci Moreira followed suit, pushing the pace on the 10km run for second, while Matheus held strong for the bronze.