Following the tragic earthquake that hit Nepal in April 2015, the International Triathlon Union (ITU) began a fundraising campaign to help the Nepalese people, and the Nepal Triathlon Association (NTA), which succeeded in raising more than $10,000 for Nepal. Half a year later, ITU an agreement is now in place to not only rebuild a school in Nepal, but to also create a Triathlon Talent School, to help promote triathlon to the new generation of young athletes in the country.

“I’d like to thank everyone that donated to the campaign, as well as to all of the National Federations that stepped forward to assist us in helping our friends in Nepal,” said ITU President and IOC Member Marisol Casado, who traveled to Nepal to sign the agreement and see first-hand how the funds will be distributed.

”It really is an honor to see that the funds raised by the triathlon family will be used to help Nepalese students, as well as young triathletes, who will now have new facilities to learn and practice”, remarked Casado.

“The Nepal Triathlon Association family is really thankful to the ITU President, Marisol Casado, for her initiative to call on the global triathlon family to come together to help Nepal in this difficult situation. We thank all who have been a part of this campaign, who will now be able to see that dream, the one of helping our people, a reality,” said NTA Secretary General Nilendra Shrestha. “As there is a need of help and assistance in every sector, NTA decided not to spread the amount on individuals, but to choose one school that was destroyed and help completely rebuild it.” 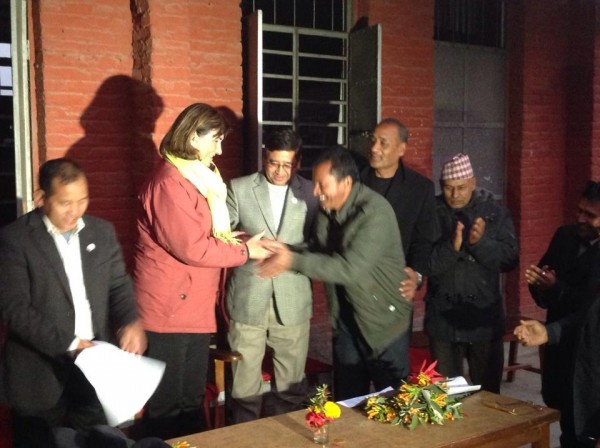 On January 12 2016, ITU and the NTA were on site when a Memorandum of Understanding was signed with the management committee of two schools in Bhaktapur - the Ganesh Primary School and Binayak Saraswoti Secondary School- to use the $10,500 that ITU raised last year to rebuild the facilities. The two schools will be merged into a new school named Shree Ganesh – Binayak Saraswoti Lower Secondary School.

Also, the new school management will provide five Ropanies (aprox. 2500 m2) to build the Triathlon Talent School and a student hostel within its structure. The Nepal Triathlon Association will select talented young athletes from all over the country and accommodate them in the newly built hostel, and they will be educated in the Shree Ganesh – Binayak Saraswoti Lower Secondary School.

The funds donated by ITU were raised in a solidarity campaign called the Triathlon Family Nepalese Earthquake Emergency Fundraising Campaign, which raised emergency funds for the people of Nepal. To raise funds, an ITU flag signed by Olympic medallists Alistair Brownlee (GBR), Javier Gomez Noya (ESP), Lisa Norden (SWE) and World Champions Gwen Jorgensen (USA) and Non Stanford, as well as 120 more elite athletes was auctioned off on Ebay with all of the funds were sent to help Nepal. ITU also donated all of its May earnings from TriathlonliveTV passes to the fund.