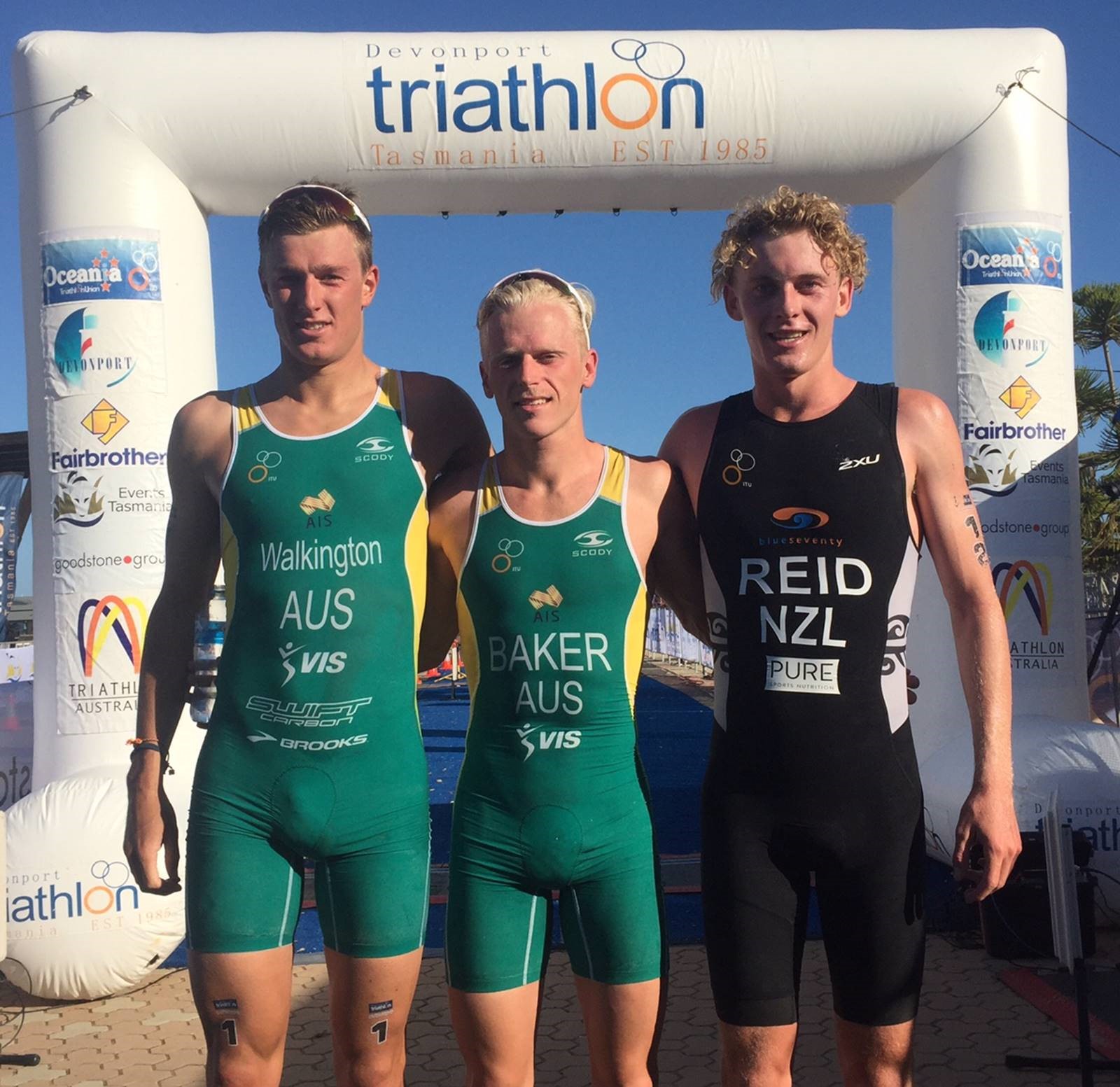 Australian triathlon welcomed two new faces to the top of the OTU Oceania Championship podium in Devonport today while an unstoppable warhorse showed all the toughness that has made him a five-time world champion.

And in the final event of the day, five-time ITU World Paratriathlon PTHC (Hand Cycle) champion Bill Chaffey, survived a spectacular bike crash to pick himself up off the road to add another Oceania title to his long list of victories.

All three will now set themselves for the ITU World Triathlon Series and World Paratriathlon Event - which will double as the first 2018 Commonwealth Games nomination race on the Gold Coast on April 8.
It was a big day out for Jeffcoat, who reveled in the one-metre choppy conditions that blew up in the afternoon and saw her steal a one-minute margin on the field.

As hard as she tried in the first 20 kilometres of the bike, which included the North Street hill climb eight times, not even noted bike rider Gillian Backhouse, as hard s she tried, could bridge the gap and coming into the start of the run, Jeffcoat had extended her lead.

And the Mick Delamotte coached Jeffcoat never looked like fading, showing all the grit determination that has made her one of the sport’s rising young stars.

“My nature is to always go out hard but I guess the choppy conditions played into my favour - I do come from a surf background and I was able to take an advantage of that, “said Jeffcoat, who chalked up her second automatic World Championships nomination in the process.

“I wasn’t going out on to the bike to try and gain ground I was just trying to hold it and see what happened, if the field court me they court me but I just got stronger which was really nice to see and to have any lead ahead on the run is a bonus and I was able to hang on till the end.

“I haven’t been doing triathlon for very long and last weekend (when I was fourth in the Mooloolaba World Cup) was my favourite result so far in my career but this is equal to it and to gain an Elite and Under 23 Australian title and against a field that includes Gillian Backhouse who is a great competitor, is certainly satisfying.”

It didn’t take Baker and Walkington, along with New Zealander Tayler Reid, long to break away after the 1.5km surf swim to ride away on the bike.

The trio rode together for most of the 40 kilometres with the Aussies working together to try and break their Kiwi rival - before they hit transition – when Baker made the race his own and was never headed in a win that played some part in making amends for the disappointing disqualification in his WTS debut in Abu Dhabi at the start of the month.

“It was important to come to Devonport to earn some ITU points; to get a performance on the board and to get that anger out and to get ready to race with a cool head for the Gold Coast,” said Baker, who produced the best individual performance of his career, earning him automatic nomination for the Under 23 World Championship team for Rotterdam in September.

“I didn’t know how I was going to feel but it was important to keep the water intake and the electrolytes up and to work through the first five kilometres with Marcel and Tayler on the run.

“Marcel and I have been training well together but he came down with something a few days ago and he was unwell. I think it impacted on his performance but he raced well.”

Baker not only won the Elite title from Walkington and Reid but also the Under 23 championship from Reid with fast finishing Gold Coaster Daniel Coleman third.

For the 41-year-old unbreakable Chaffey, his performance to get back on his damaged handcycle after crashing was yet another example of just how tough a competitor he is.

Chaffey and vision impaired paratriathlete Jonathan Goerlach converged on a tricky 90 degree technical corner and it was Chaffey who came off second best.

“I knew it was a tricky corner but we hit the corner at the same time and me being as aggressive as I am I went for the inside running and because I took it too sharp on a three wheel bike, it tipped on to two wheels and headed straight for the wooden bollards.

“I thought if I hit this head on I’ll do some serious damage to this bike so I slid off on the side and still did some damage to the bike and took some skin off and got back on.”

He went straight to first aid to get patched up and will have to send off to Switzerland to get special new parts for his bike in time for the Gold Coast race.