Non Stanford (GBR), Anne Haug (GER) and Gwen Jorgensen (USA), the three elite women at the top of the World Series rankings, spoke at the official press conference ahead of the PruHealth World Triathlon Grand Final London. With just 13 points separating the three athletes in the rankings, the winner in London is destined to take the World Series title. 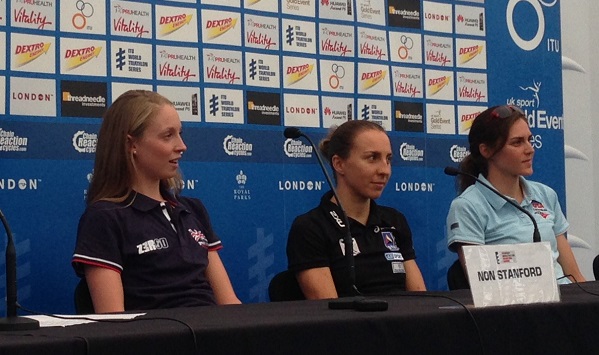 On competing again in Stockholm after injuring her arm in Hamburg this July:
“Thankfully it is completely better now, which is a relief. Going into Stockholm it was quite tough and I was swimming pretty much with one arm. I damaged my stronger arm, my dominant arm so the race was hard work and the preparation that went into it was well managed.”

“I’m lucky to have a great team around me and the physio team and the coaching team got me through it. I didn’t exactly have the best swim in Stockholm but I got through it and I survived and that was the aim and hopefully my swim this weekend will be back to where it was before the accident.”

On her pre-race preparation:
“You can’t change the world in the last two days. So today I did a little of everything, I was running in the morning, I did a little spin around lunchtime and I’ll go to the pool after the press conference and tomorrow I’ll do a run and the bike with a little bit of swim in The Serpentine as well. And on race day I’ll wake up early, have breakfast and get ready to race.”

On how the course in London has influenced her career:
“I attribute a lot of my success to the London course. In 2011 I had a breakthrough race and I think it really put me on the triathlon map. And in 2012 at the Olympics I got a result I wasn’t very happy with and it was humbling. I made some decisions after that, that I wanted to make some investments. I switched coaches to Jamie Turner and I’m really happy and excited with where my triathlon is right now. “

"Get set to RELIVE 2019 Banyoles World Cup action on @worldtriathlon Facebook! Featuring the stars of World Triathlo… twitter.com/i/web/status/1…" - 1h ago...