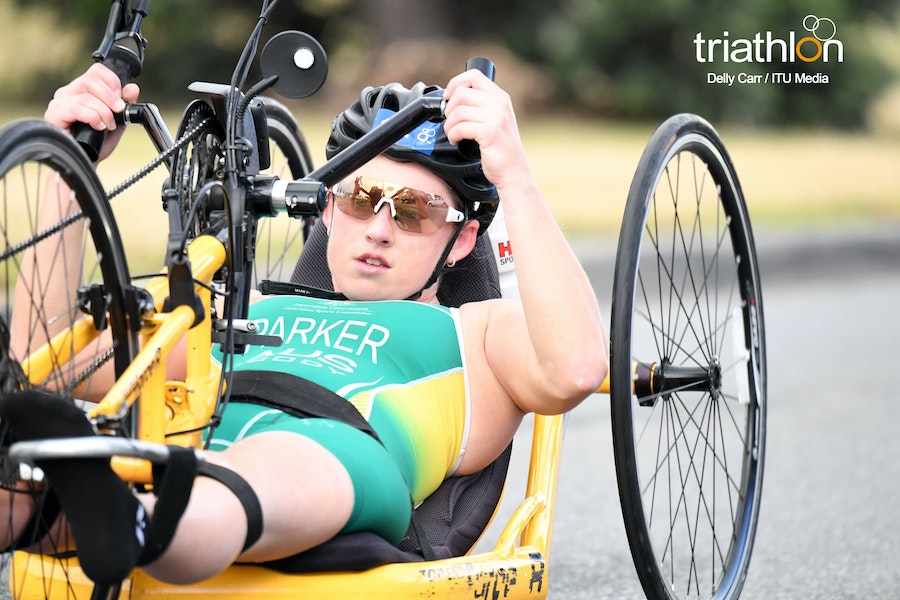 It was in early April of 2017 when Australian triathlete Lauren Parker felt at the peak of her career. After finishing second in the 2015 Ironman World Championships in Kona, the 28 years old triathlete was training for 35 hours a week with a goal on her mind: a podium at the Ironman Australia Triathlon in Port Macquarie. On an early morning ride a week before the race, she crashed into a guardrail while traveling about 45km/h, suffering broken ribs, a punctured lung, a broken scapula, broken back and a broken pelvis. And worst of all, she has had no feeling from the waist down since the accident.

Doctors gave her a one percent chance of walking again. Nine months after the accident, she has come back to a podium: Lauren finished second in the 2018 St. Kilda OUT Paratriathlon Oceania Championships held this weekend, proving that one only needs lots of strength and courage, and a few months, to adapt from being an elite triathlete to still compete in the sport she loves, now this being paratriathlon. Her goal is now set on the Commonwealth Games, and her second place in St. Kilda has placed her as one of the possible Aussies representing their country on this year’s Commonwealth Games, to be held in the Gold Coast in April.

Lauren’s transition to adapted sport was one of the quickest ITU has on record, and was possible not only because of her unbreakable will and determination but also because she lives in Newcastle, where the multi-medallist in paramarathon Kurt Fearnley lives, along with his coach Andrew Dawes and his Paralympic medallist wife Christie. They have been the ones helping Lauren in her quick transition to wheelchair sports with their expertise and coaching.

Lauren, a highly committed professional athlete who loves triathlon, said no when, just a few months after her accident, Kurt suggested she could do wheelchair marathons instead, but she was focused on going back to triathlon racing.

Lauren is not the first elite triathlete that, after an accident or illness, have to adapt to paratriathlon racing. Frenchman Yannick Bourseaux needed a year for that transition, as he was combining paratriathlon with para Nordic skiing at the same time and after his accident, while Spaniard Eva Maria Moral needed a bit more than a year to get used to the handbike and the thrill of paratriathlon competition after the accident that left her, also, in a wheelchair.

With the help of many friends within the triathlon community, and the advice of her friend and former successful Ironman athlete Brad Fernley -who was training with her when the accident happened- she was able to start training again for paratriathlons, even before she was allowed to drive cars. And less than nine months after her accident, the big day came in St. Kilda, first paratriathlon race of the year, where she competed in the PTWC class and crossed the finish line in second place.

“We are so excited to see the potential in our Aussie PTWC women, with Emily Tapp, Sarah Tait and now Lauren, as well as the rising talent around the world. It will be super racing in the next years”, said Kathryn Periac, Paratriathlon High-Performance Manager of Triathlon Australia.

The female PTWC class will be represented in the Commonwealth Games in the Gold Coast in 2018, the same place where parathletes will compete for the world crowns in September.