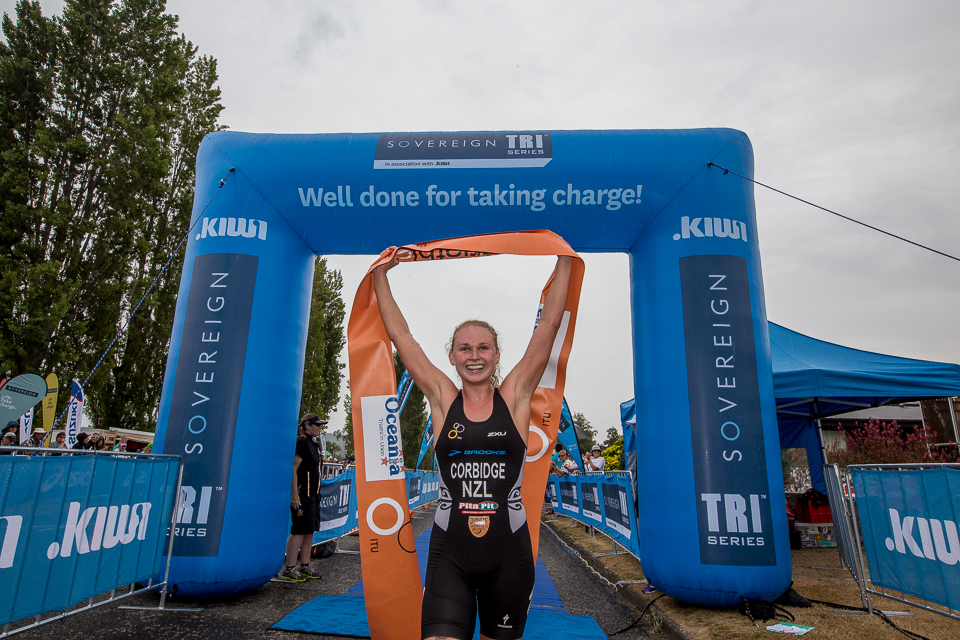 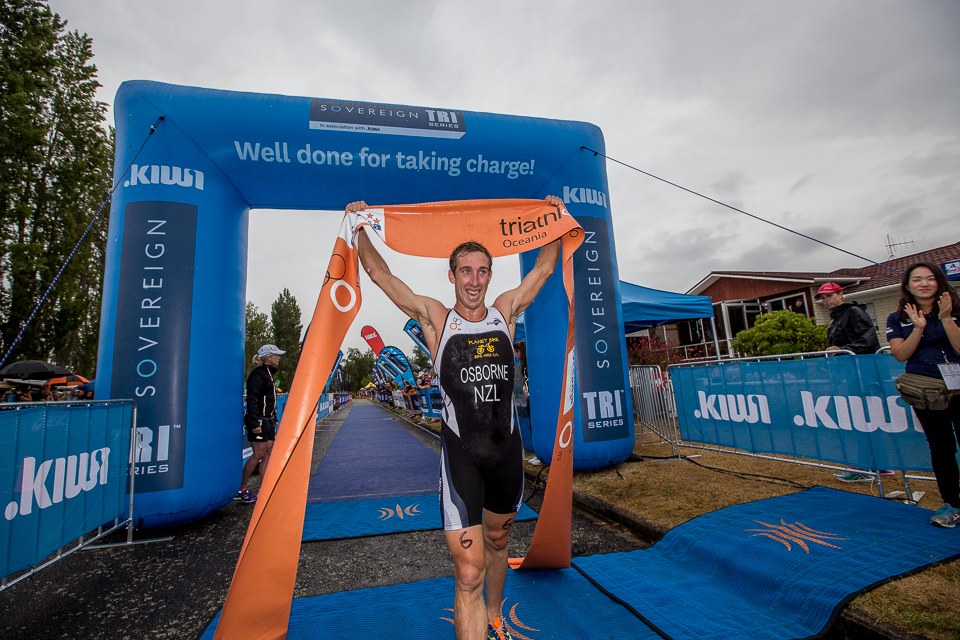 Sam Osborne (Rotorua) and Sophie Corbidge (Auckland) stole the show at the Oceania and New Zealand Sprint Triathlon Championships in Kinloch today, each racing to an equally impressive victory at the Sovereign Tri Series event.

Both had to contend with tricky conditions, with light rain falling consistently throughout both races, making the technical bike course as much a bike handling exercise as it was a question of speed and power.

Corbidge was in the lead group out of the water and along with fellow Kiwis Kate McIlroy (Wellington), Rebecca Kingsford (Tirau) and Simone Ackermann (Whangarei) proceeded to push the pace, asking big questions of former World Champion Lisa Norden (Sweden) and Grace Musgrove (Australia) as they too looked to keep in contact with the leaders over the 20km bike leg.

McIlroy was the first to suffer but it wasn’t through any physical failing, the London Olympian dropped her chain on the final lap and lost a vital 30 seconds coming into transition, allowing Corbidge, Kingsford, Norden and Musgrove the chance to move away at a vital time.

Once on to the run though Corbidge was the dominant figure, moving straight to the front of the race and never being challenged, despite the best efforts of a strong looking McIlroy and a fast finish from young Aussie Jaz Hedgeland who moved past all but the Kiwi to claim silver. Norden earned third place prize-money but was not eligible for the medals, with bronze going to McIlroy.

Corbidge was beaming after her victory.

“It is quite funny looking up at the Sovereign ‘take charge’ motto on the finishing banner, my flat mates will agree, I like to say ‘I am not a control freak, I just like to be in control’, so it is kind of appropriate the way I raced today I guess.

“I think the course is so tough and the quality of the athletes at the front was quite high so I think the chances of anyone breaking away were minimal, everyone was riding really strong and aware of how wet it was on the downhill and not taking too many chances.

“This is what it is all about, the days when you get up and don’t feel like training or have been through some bad injury patches or have been knocked down, to be back on top of the podium again, this is the best feeling in the world, I couldn’t be happier.”

Hedgeland finished runner up overall and took out the U23 Oceania title.

“I didn’t have as good a swim as I wanted, I knew I had to work hard on the bike and then I was feeling good on the run so tried to push all the way to the end. I could see them ahead and that helps you push a little more, it hurt a lot and my legs were absolutely burning right through to the end.”

Lisa Norden was delighted to be back on the podium at an ITU race.

“I guess I take out the 30+ category today against these young girls! It is great to be back and racing, my coach had no expectations on the results, it is all about getting back into it and to come away with a podium, my first for a long time in an ITU race I am delighted, thank you New Zealand.

“I am based in Cambridge for a few months, I will race the Sovereign Tri Series in Takapuna and the ITU World Cup race in New Plymouth so I am looking forward to my stay here for sure.”

No sooner had the dust settled – or should that be the water pooled on the women’s race, out came the men and the rain fell even harder.

The race followed a similar pattern as a group of 7 athletes formed a lead bunch on the bike and despite the best efforts of Robert Huisman, Osborne and Tayler Reid (Gisborne) in particular, there was no break off the front. Luke Willian was the sole Aussie in the lead group, while all three Japanese competitors were doing their best to hold on to the flying Kiwis.

Osborne was beaming while reflecting on his win.

“That was fantastic, I have never come close to winning one of these, and today it all came together. Last year I had a lot of bad luck here at Kinloch but that feeling today was fantastic.  It was tricky today, the descent was a bit scary really, I was nervous about coming down and I saw one of the boys who looked to have had a rough fall. Tayler was super strong up the hill every time, I don’t think we quite had enough to stay away though.”

Luke Willian tried but couldn’t go with the powerful Kiwi.

“Sam had the legs today on the hills, I was a bit tired and Sam has that over me at the moment but I will keep working hard and make sure it doesn’t happen again. My big goal is to make the junior team to compete in Chicago at the World Champs in September.”

Tayler Reid loved every minute of the race in the tough conditions, the teenager earning third overall prize money and a silver medal in the U23 category behind WIllian.

“That was so fun, it was great. The plan was to push, smash it up the hill, we got a couple of breaks each time but we kept getting caught. I probably spent too much time at the front and that might have come back to me later on and I took a tumble on the second last lap, I pretty much bounced off, smashed the hoods on the brakes back in the right position and got back on, that is the way we do it Gisborne style I guess, smash it all day!”

Meanwhile Brett Tingay (Canterbury) and Sam Warriner (Taupo) were dominant winners in the Tri-Sport Taupo Erin Baker Tropy race over the standard distance, both easing away to comfortable margins on the 10km run to put their names on a trophy with a rich and proud history, a race that was run earlier in the morning in near perfect conditions under overcast skies with next to no wind.