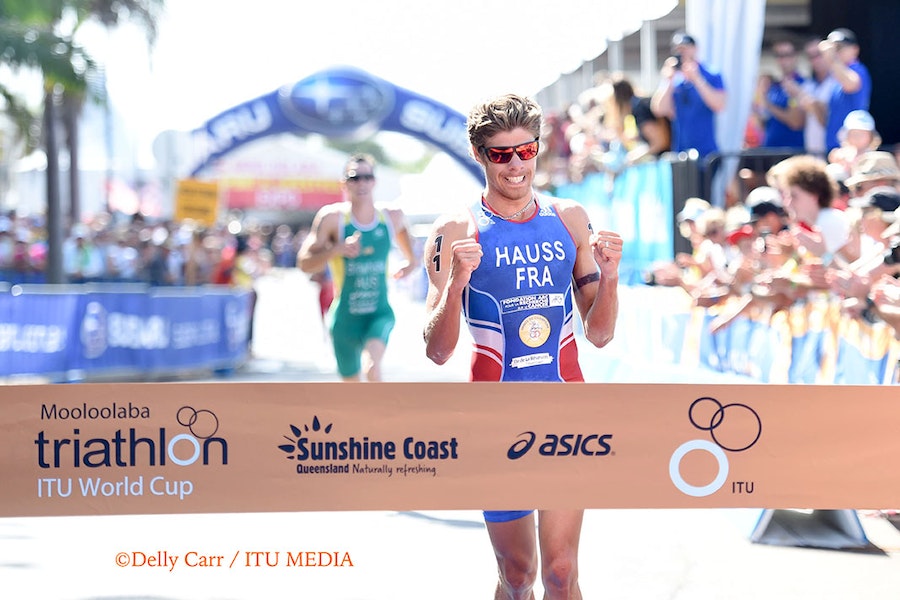 It was always been a case of close, but not quite there, for France’s David Hauss at Mooloolaba. In a handful of appearances at the ITU World Cup race on Australia’s Sunshine Coast, he had collected two bronze medals, two fourth places and one sixth.

But 2015 finally turned out to be his year. While Hauss left T2 around 15 seconds down on the breakaway pair of Great Britain’s Thomas Bishop and Argentina’s Luciano Taccone, he caught them halfway through the run and was never headed. It was Hauss’ first World Cup win since 2012 in Ishiagki, Japan.

“It’s really my best race, it’s been like seven years I’m looking for this victory. Today I got the win and it’s perfect,” Hauss said.

Behind Hauss, Australia’s Jacob Birtwhistle continued his impressive start to 2015 with his first ITU World Cup medal. Birtwhistle sprinted away from Spain’s Vicente Hernandez in the final few hundred metres to claim silver.

Earlier in the day, the swell had was up for the men’s swim and a small group managed to take advantage. Led by Australia’s Peter Kerr who was first out of the water, a group of ten, including Hauss, Birtwhistle, Tommy Zaferes, Benjamin Shaw, Ben Kanute, Gregory Billington, Tony Dodds, Michael Lori and Pierre Le Corre eeked out a lead on the first lap.

But with Bishop leading the chase it didn’t last long, and halfway through the bike the lead group swelled to almost 50 athletes. Bishop then continued to push the pace and with Taccone broke away just after halfway. Together they pulled together a decent 20 second lead on the rest of the field leaving T2. But it wasn’t quite enough to hold off a fast-finishing Hauss.

Behind Hauss, Birtwhistle and Hernandez went toe for toe for most of the 5km run before the young Australian turned up the heat in front of his home crowd.

“I’ve been doing a little bit of work in the surf in Wollongong, so I was happy it was out in the Ocean this year. I think I was the last person on that first lap to get on the [lead] bike group. They eventually came together… I knew it was going to come down to a tough run, and it did. I’m really happy to have what it took over the last k to get that silver medal.”

Behind him Hernandez’s held on for his second ITU World Cup medal, and added to a successful day for the Spanish team, with Tamara Gomez Garrido saluting in the women’s race.

“I’m very happy with the race. I started the swim a little bit after the other guys, I didn’t hear the horn blast very well. But I finally made it to the first group, as the bike was just one big group. Finally I start to run a little bit slower, I didn’t get to the front of the race to David Hauss… but finally I finished third and I’m very happy with my performance.”