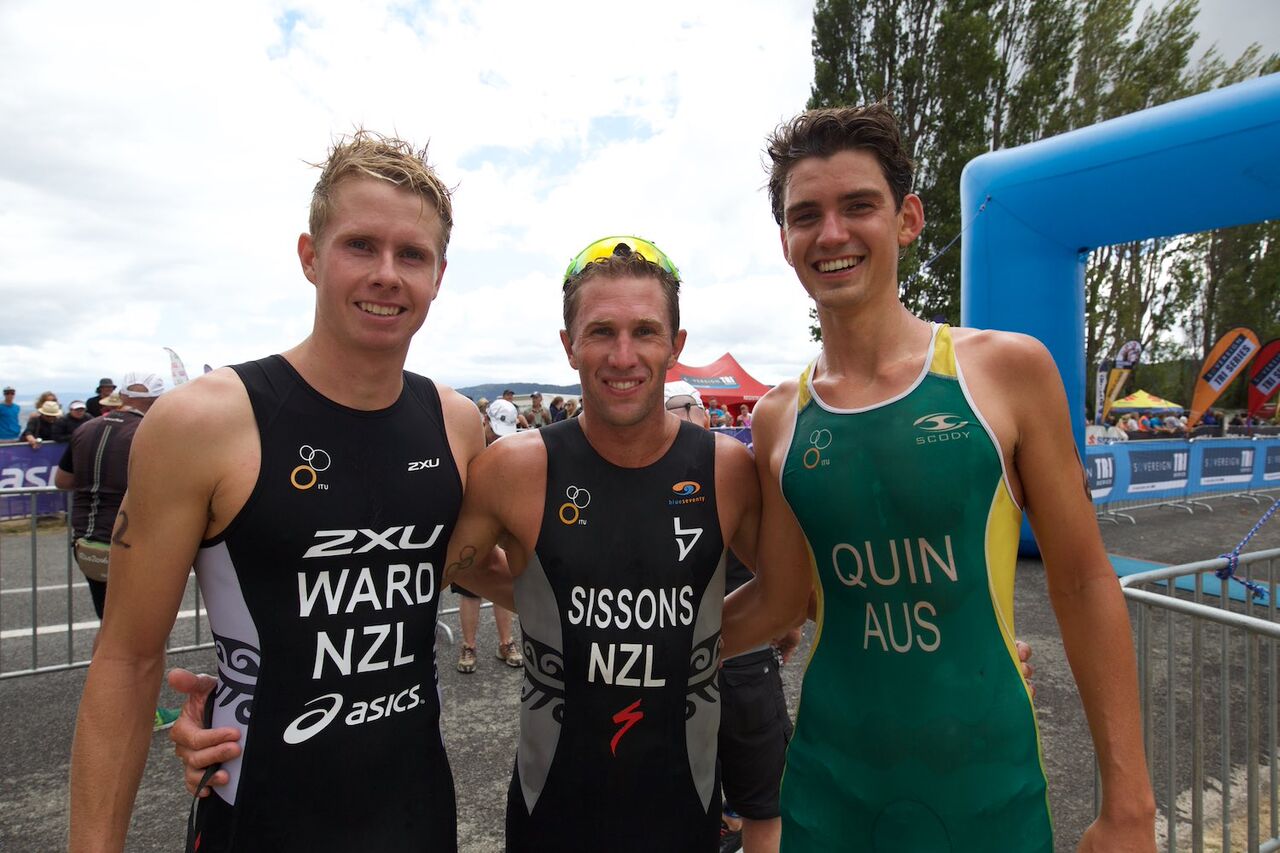 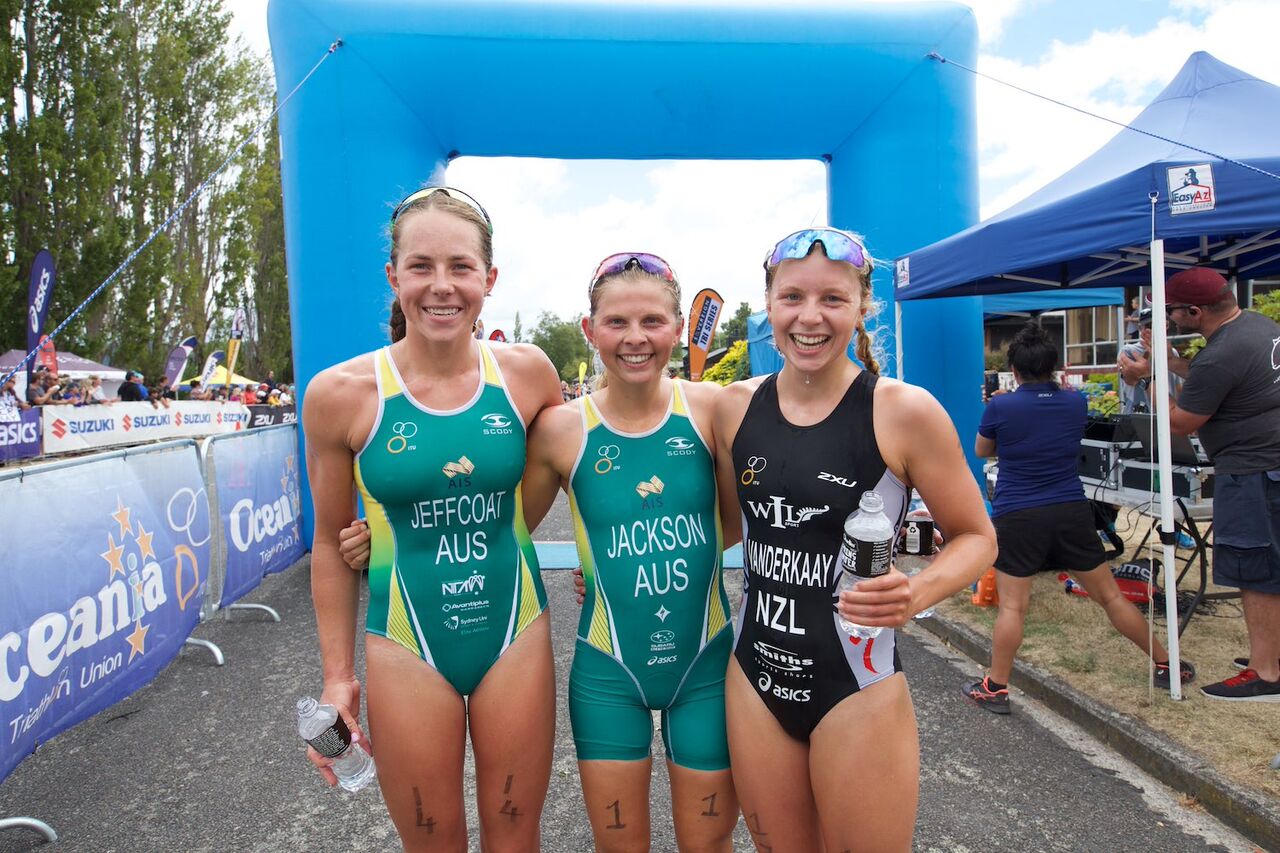 Over the weekend, it was the Australian’s and Kiwi’s who battled it out for a podium in the Sprint Oceania Championships in Kinloch. The race combined as the Elite and U23 Sprint Championships with Olympians Ryan Sissons (NZ) and Emma Jackson (AUS) as hot contenders for top spot.

The Australian contingent in the women's race was strong with both the Emma’s, Jackson and Jeffcoat taking first and second overall. Jeffcoat has returned to racing after a tough few months but will be proud to kick off the year as the U23 Womens OTU Sprint Champion.

Local Taupo resident, Nicole van der Kaay settled for the second (U23 Women) but the strong swimmer was happy with her overall performance. Racing on home ground, van der Kaay knew she’d have a big advantage. The technical course is made up of a few tight swerves, not to mention, the high speed downhill race. Throughout the bike leg, van der Kaay, Jeffcoat and Jackson were riding each lap skillfully. However, the real test was the hill climbs and intense focus on the downhill by the athletes.

The Australians held their own, even on a difficult course which meant van der Kaay had her work cut out for her. “They were very strong on the bike and pretty much towed me around the whole way,” she said.
“Hopefully I just keep getting stronger as the season goes on and that my running weeks kick in soon too.”

Jackson had a strong swim and run but the bike course difficulty was challenging. Although she led the front pack up Locheagles Rise on the second lap, Jackson said “I have plenty of work to do on the technical sections of the course.” Strength and technique was tested on the uphill climb and would often set the group apart on the descent as they whipped around the corner back onto Kenrigg Rd. “It was a very tough circuit, not only is the uphill section very steep and hard, the downhill is quite technical which means you have to concentrate quite a lot down it and it isn't as easy as it looks,” she said. “Nonetheless, it was a great event run by Tri NZ and the crowd support was quite good out on the course which was great to see and very encouraging.”

The final race of the day, Men’s Elite, had a rough start with one athlete pulled out at the first buoy after taking a knock to the throat. The Kiwis made up over half of the field with a majority competing for the U23 title.
Ryan Sissons came out of the water 21 seconds after lead swimmer, Matthew Roberts (AUS). He may have been off the pace in the swim but experience gave him the edge when he completed transition 1 in 38s.
Out on the bike course, Sissons was chasing Sam Ward (NZ) and Roberts with fellow kiwis Tayler Reid and Trent Dodds. “It’s a super hard course and pretty unrelenting. The bike course always mixes things up so as soon as I got onto the bike I knew that I’d ride at the front as hard as I could,” he said.

The lead only held for one lap when both packs turned for the Rise on their second round. Once again, strength and technique separated the athletes and on the descent, Sissons joined Ward and Roberts with Reid on the tail end. “With a small group like that and a minute lead, it was just a matter of conserving as much energy for on the run and pushing through that last lap,” he commented. Sissons coasted home comfortably for the Elite Men win while Sam Ward took second place followed by Charlie Quin (AUS).

Ward also claimed the U23 Mens OTU Sprint Champ title and joining him third on the podium was 17-year old, Trent Dodds (NZ). Dodds has had a great start to the season, he picked up a win in the sprint distance at the Sovereign Tri Series, Tinman and was also crowned National Champion in the Junior (U20) division at the Future ChampioNZ Triathlon Festival in December last year.